Well, it's been 3 1/2 months since we first met Adam and now he is finally home. We picked him up from the airport this afternoon and he was amazing. He was all smiles (and was apparently the same way on the flights ... he made lots of friends). He is much more active then when we saw him last in mid-January. He has three teeth (he had the very beginning of one in January). We changed him from his two layers of thick clothes to one short-sleeved romper and a thin pair of socks. He seemed thrilled to get out of the hot clothes. When we got him home, he found his feet! I don't think he saw them often in Kazakhstan because there, one pair of socks isn't enough. He needs footies on his pants and at least one pair of socks ... two if you take him out of his play room in the baby house.
He ate some apricot mush and eventually went to sleep, where he is now. A word to the wise ... don't go lifting the covers to show people how cute his outfit is when he's sleeping ... he may wake up!
Now here's what you are all waiting for ... pictures. Enjoy! 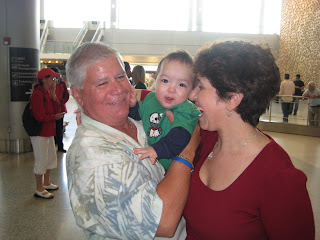 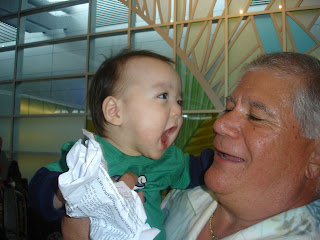 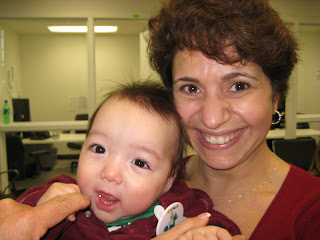 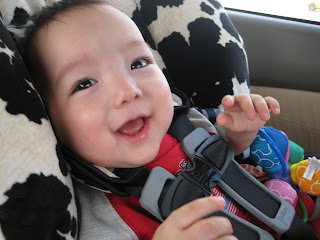 WOW!!! I am in tears!!! CONGRATS!!! CANNOT WAIT TO MEEET HIM. I am sure you will get settled into a new routine quickly...I will call you soon...but you give you some time to get settled. love you.

Congratulations! It's nice not only to find you online after all these years, but to do so and have this wonderful news come along with it. I would wish you all the best, but it looks like it already came true!

congrats on getting your sweet son home!

Leeza will NOT leave shoes or socks on..they go off the car, and even on long walks in the stroller when it's cold outside...i think she likes the freedom of free tootsies. :)

We are so delighted for you -- we have been following the saga. I'll let our kids know they have a new first cousin twice removed (I think that's right). Love, Mady and Michael

Congratulations! It is great to see another Kostanai cutie home with his forever family.

Congratulations! I am so happy for you. What a wonderful thing to have Adam finally at home with you! We can't wait to see him when you are in PA.
BA and G

CONGRATULATIONS! We have been following your blog, because we are waiting to travel to Delphin BH, hopefully real soon, with the Ceravola's! We are happy you can begin your life together. Would love to meet you sometime if you are in PA, and we could have a little Kaz reunion, once we are home with our Kaz cutie! Enjoy parenthood, IT IS THE BEST!
Dan and Colleen, Lancaster, PA

Congratulations! He is a cutie! We worked with Oleg and family while we were in Almaty last March. I assume it is the same Oleg...
We adopted from Uralsk and have been home 1 year this week! Enjoy each day because it flies by! feel free to check our our blog and Kaz cutie as well!

I meant to also say that we are in S. Florida as well! We live in Davie.