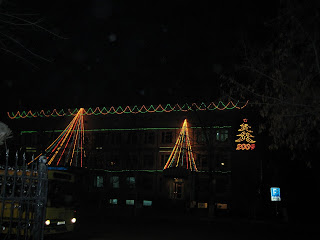 It’s beginning to look a lot like Christmas, but the celebration here is for New Years. There seem to be a lot of similarities between the two. The only Christmas celebrated here is the Russian Orthodox Christmas on January 7. However, their New Years celebration is a huge deal. People gather in the center of town which is a big open square area. They celebrate by getting dressed in costumes and drinking all night long. Yes, they drink outside even in the freezing weather. I guess it’s similar to those crazy people in the States who gather in NYC to watch a ball or an apple fall at midnight regardless of the weather.
They do not have a Santa, but they do have a Father Frost which looks mighty similar to Santa. He lives in North Russia and has no wife or kids, but he does have a granddaughter. He delivers gifts to children at their homes on New Years Eve. However, being good all year doesn’t get you a gift. You either have to be dressed as Father Frost or his granddaughter, sing a song about one of them or recite a poem about one of them in order to get a gift. People will hire Father Frost to come to their homes or they will get friends and neighbors to do it. While in the US, Santa gets milk and cookies (or chocolates as Bryan and Kellie left him last year), Father Frost gets a shot of vodka at each home. Maybe this is a tradition we will bring back with us J They put up lights and even trees here too. Sometimes, the gifts are left under the trees when kids go to sleep. Also, Father Frost has a sleigh and horses (not reindeer) to bring him around to deliver the presents. So, although we are not yet home, the holiday season is here too. 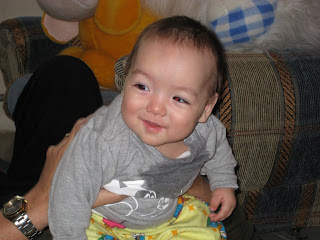 Now, what you all really want to hear about is Adam. He is great. He’s been a bit fussy for the past couple of days and apparently didn’t sleep well last night. However, Olesya our interpreter has an amazing ability to make him laugh and laugh and laugh. He is sitting up a bit better than he was just a week ago. He isn’t crawling yet, but his scooting is improving. He seems to have grown since we’ve gotten here. Tomorrow we hope to get his new measurements to see exactly how much he has grown. He smiles at anybody who will smile at him and his personality lights up a room. 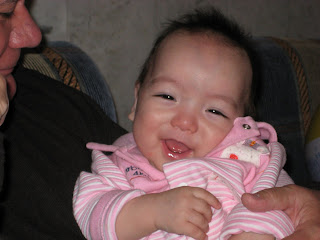 What would a post be at this point without mentioning that the GATORS ARE GOING TO THE BCS CHAMPIONSHIP GAME and we are thrilled. We hope somebody recorded the SEC championship game for us. We hope to be home within a week and we can’t wait to see everybody.
Posted by Shana and Larry at 3:42 AM

HEY good new all around...Adam smile is beautiful and the gators are smiling too. Looking foreward to your return. As Always Love Art and Sandi

Hi guys, its Poppop. I sure got a really cute and sweet grandson. I can't wait to give him a big hug and a kiss, but I guess I'll just have to wait until he arrives in Fl. I only wish I could make this go a lot faster, but there are some things even a Poppop can't do.
Anyhoo, hopefully, you will get to Fl before mom and I do. Like you, we're looking forward to a few days of warm, sunny weather, seeing you guys and playing some golf (just me and Larry).
Enjoy the rest of your trip and give Adam a kiss from me