What is in a Name?

Some of you have asked how we came up with Adam Garrett Belyeu. Larry and I decided to follow a Jewish tradition and name our child after people who were close to us who have died. Adam Garrett is our way of honoring two important people in our lives.

Ma Belyeu (Gloria) was a very wise and down to earth woman who loved her boys (especially Larry, the baby of the family). She was the anchor of the Belyeu home where family came first.

My Grandpop Shor (Artie) was a strong and passionate man who, no matter how much he worked, always made time for his family. He was heavily involved in his community and was a friend to everybody.

When Larry and I met, Larry said that he always wished that I had met his mother. I told Larry that I always wish he met my Grandpop Shor. And had they met each other? Now, I would love to be a fly on the wall for that one.

So we decided to use an “A” and a “G” for our child’s names. We both loved the name Adam Garrett. We have not yet decided on whether we are keeping Adil as a second middle name, but we are told that it means fair and honest. Whether or not we keep his given name, we are sure that he will keep the qualities that his name has given him. 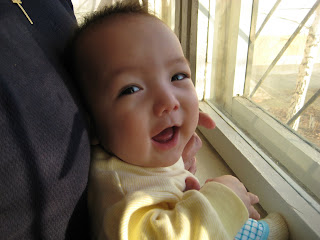 And what does Adam Garrett Belyeu think of his name and of those it honors?
Posted by Shana and Larry at 2:58 AM

He looks so happy being held by his Dad and looking at his Mom. What a smile! We are loving this daily communication. Stay warm there.

He is such a cutie! If photos are indeed worth a thousand words, he appears to be relatively calm/chill ... Thanks for background on names. I did not incorporate Lucie's original name in her name (Yuri) and kinda/sorta regret it ... but at the time, not doing so felt right. Either way works ... and if you don't, he will always know what it was...love the posts; thanks for sharing all your experiences over there. What a month you are having! Love, Kym

We're so happy for you and can't wait to meet Adam. Enjoy your time with him with no other distractions. Dan said he hopes that Larry has learned to change a diaper!

I can't wait till see baby Adam. In his pictures he is SO CUTE!!!! I love you very much and kiss Adam for me!!

I'm back again!!! I hear it's really cold where you all are. I have lots of winter jackets that I'll save for Adam. I got all of Alec's old clothes so Adam will get all of mine(the one's that are in good shape). Still love you all, NOAH XOXOXO

The pictures of Adam show him happier by the day. What a great experience to see unfold. He seems so enthralled by the world around him.
Adam, your new daddy will be pleased to hear that his beloved Gators beat the Citadel 70-19 this afternoon. The announcer claimed it was a scrimmage to prepare for the Fla - FSU game. I'm still hopeful that FSU can pull it out - will hopefully be a good game.
Your grandpa Steve is also smiling that Penn State won and is going to the Rose Bowl.
It's halftime with FSU-Maryland (21-0) GO NOLES!!!
Your 4-legged children are all well but I'm sure they miss you. They are keeping Tiffany warm on the cool nights we have had for the past week (been in the 50's every night - cold for Nov. in SoFL)
Keep warm - send more pictures! We miss you guys.
Steve, Leslie & Tiffany